Apologies for my lateness. So much to do, so much tennis of my own to play, that I’ve only just caught up with the final of the Next Gen ATP Finals tournament last week (spoiler: Hyeon Chung won).

If you haven’t seen it, and you’re an Amazon Prime subscriber, I thoroughly recommend you look at the highlights or watch the final. It’s a fast, fun watch, and makes “normal” tennis look sedate. Here are some highlights.

But that doesn’t mean it got everything right. So, here’s my pick of what worked… and what didn’t.

What worked #1: Losing the line judges

Sorry line judges, but your time has passed. I realise that we’ll struggle on with them at Wimbledon as we desperately cling on to tradition, but it’s irrational: we already allow them to be overruled by Hawk Eye, so why not make this the prime judge.

So many advantages. Instant calls. Always right. No arguments from the players. Instant replays on the big screen of close calls, adding to the thrill. If tournaments can afford Hawk Eye, it should be the new default. 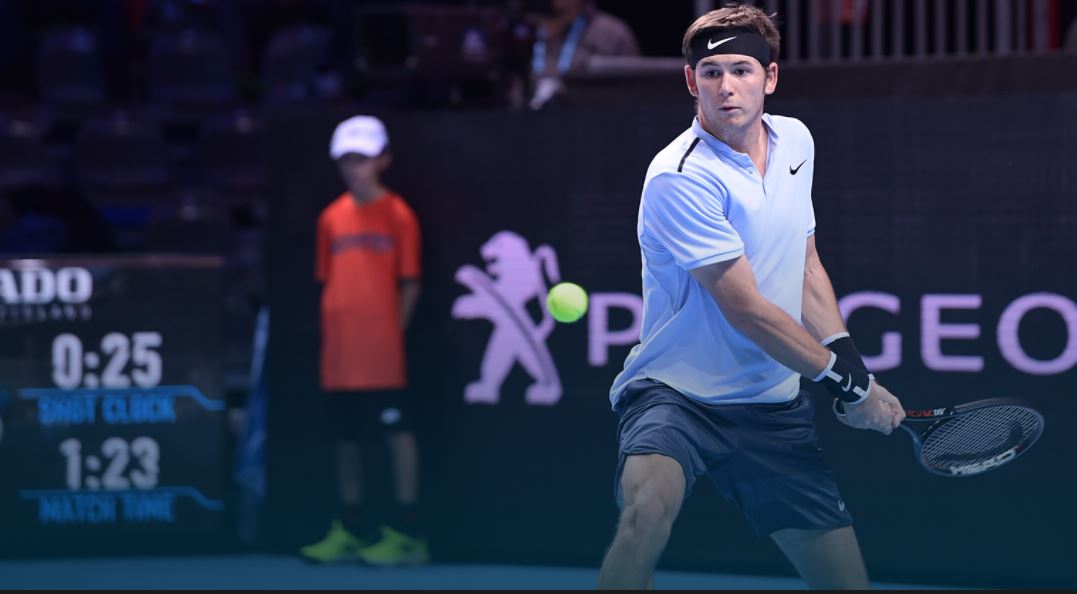 I sit here watching a Marin Cilic serving to Jack Sock (it’s recorded; don’t tell me the score), and the amount of times that man bounces the ball before serving it’s a wonder that they last for seven games. Incidentally, Sock really needs to do something about that backhand.

Is Cilic getting close to the 25-second time limit? Only the chair umpire knows. Let’s get it out there so there’s no dispute.

What worked #3: No let calls on serve

We all know that nine times out of ten clipping the net while serving won’t make much difference – the ball still reaches the hitting zone of the returner and when it doesn’t, so what? Just like a normal net cord, you win some you lose some. Let’s get on with the game. 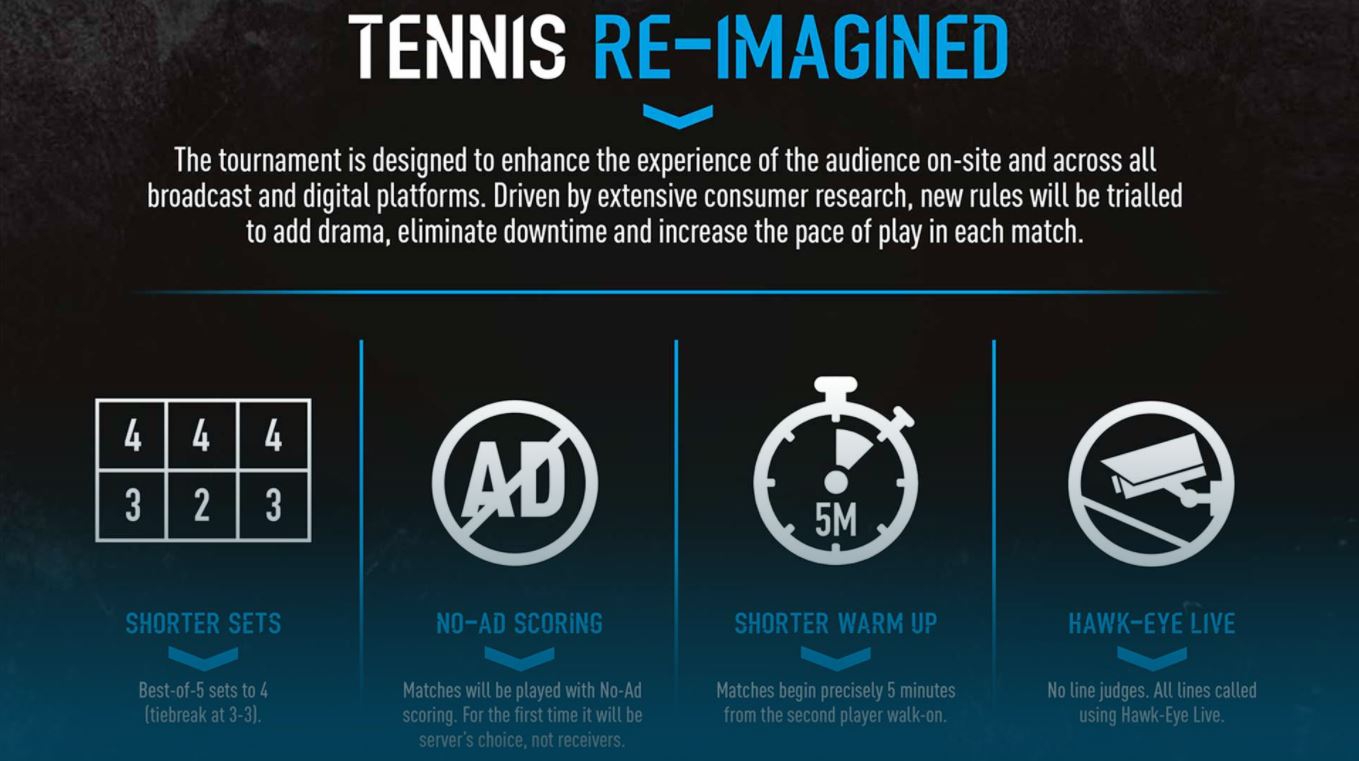 The whole emphasis of this young guns tournament was speed. Sets lasting all the way to six games? No way: it’s first to four games, and if you reach 3-3 then you have a standard tie-break.

It makes things fast and furious but actually felt a bit snacky to me. There’s little room for ebb and flow within a set – you lose your serve and you’re pretty much out of there.

That said, the quick turnover of sets means you do get the chance of big comebacks from two sets down even at non-Grand Slam events. That’s kind of fun. Perhaps it would work better if they didn’t have this next rule…

I don’t mind deciding points on principle. Sometimes games can get locked into successive deuces that never seem to end, and it becomes a toss of the coin who will win anyway. But it does feel like a sprint to reach the end of the game, so I’d prefer to see two deuces and then the third becomes a deciding point.

This was weird to start with – the court looks claustrophobic with the tramlines stripped away – but as the week went on I started to get used to it. Obviously it will only work with singles-only tournaments, but it gave this tournament a signature look.

The WTA has allowed in-match coaching for a while, at non-Grand Slam events at least, and it can be intriguing to watch a coach come on and talk to their charge at a changeover. This tournament handled things a bit differently: coaches were only allowed to speak to the players at the end of the sets, they could only do so via clunky headsets (which the players also wore), and they had to speak English.

It is interesting to listen in to these conversations, but arguably it’s not fair that Chung didn’t have that option because his coach wasn’t comfortable talking in English. But it’s also arguable that this helped him stay focused on his game plan, and solve his own problems, because he was the only player to be unbeaten the whole tournament.

What didn’t work #1: Leaving the work experience guy in charge of the opening ceremony

The ATP can’t blame local organisers for the farce that was players picking their favourite model from a line-up, for her to then remove an item of clothing and reveal which group they were in. Luckily it didn’t end up overshadowing the tournament.

What didn’t work #2: The ATP graphics

Someone needs to send a UX designer over to the ATP. They seem to think that throwing 23 pieces of data onto one screen, using two faintly different colours that you’re meant to match to each player, is a good way to communicate data. No, no, it isn’t.

What definitely worked overall: Holding the tournament in the first place 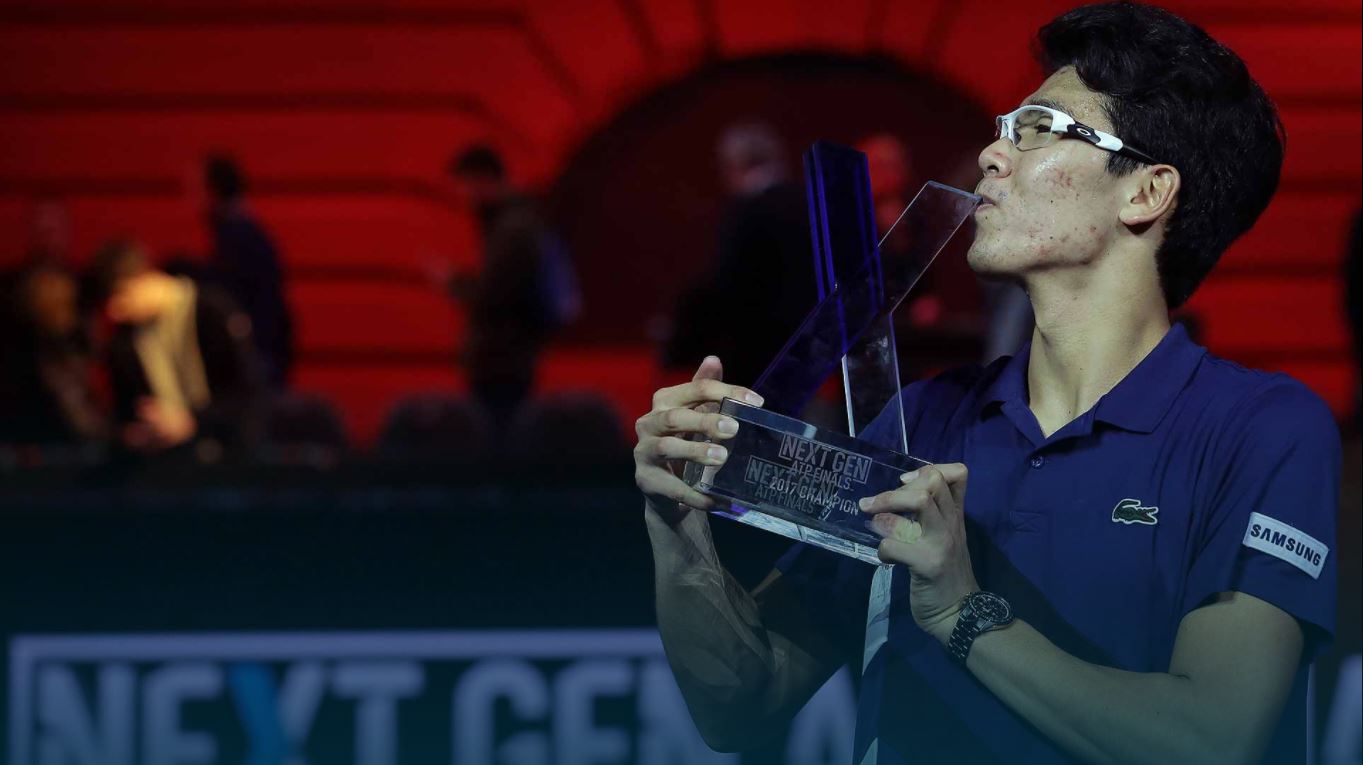 To me, a tournament like this makes so much more sense than the WTA’s Elite Trophy for the top eight players who didn’t qualify for Singapore. I’m sure the ranking points and prize money are welcomed by the players, but what does it really matter?

A tournament for the best young players, though, makes a whole lot more sense. It showcases the best new names to the world without the distraction of Federer, or Nadal’s knees. I’d barely taken notice of Medvedev, Chung and Rublev before this tournament, but will definitely look out for them in the future.