Every professional player grazes their way through a match, cramming in enough water, energy gels and, in the case of Rafael Nadal, bananas to make sure they’re performing at the peak of their potential. However, as an amateur player, it’s very easy to focus on eating and drinking properly before a match, but then completely forget about refuelling during the crucial action.

Unfortunately, long gone are the days of Suzanne Lenglen’s drinking alcohol and ”furiously” smoking on-court – today’s pros treat their bodies like well-oiled machines that need to be constantly maintained. And so should you.

But what, and how much, should you be taking in? And what’s the perfect BPM (bananas per match) rate? To help, we’ve waded through the, often contradictory, advice online to put together Tennis Talent’s top refuelling tips. 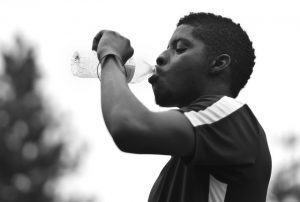 We’ve all been there: you’re so engrossed in a close-run match that all thoughts about drinking enough water quickly go out of the window. After all, you only need to hydrate if you’re thirsty, right?

Wrong. Very wrong. According to American fitness expert Samir Becic, “it is important to drink water every 15 minutes to replenish the water and electrolytes lost through sweating”. This will prevent you becoming dehydrated and, as a result, keep up your reaction speed and ability to make split-second decisions.

It should go without saying, therefore,  that hydration during a match should be taken very seriously indeed. Nutritional therapist Sarah Brown offers the following stark warning: “By the time you feel thirsty, you are already dehydrated and may have lost up to two litres of water (equivalent to 1% of your body weight), at which point thermoregulation is already impaired. Don’t leave it until you’re thirsty to start drinking. ”

Of course, most athletes now rely on a mixture of plain ol’ water and electrolyte-rich energy sports such as Powerade. These can certainly help an amateur, but remember to keep a healthy balance between them and water – and never fall into the trap of drinking heavy-hitters such as Redbull. Also, if you’re not inclined to splash out on litres of the blue mixture, a good alternative is old-fashioned fruit squash.

“To be honest, I think bananas are a pathetic fruit,” wrote Andy Murray in his 2008 autobiography. However, the World No.1 has since been converted by the carbohydrate and potassium offered by the maligned yellow fruit.

Indeed, for decades bananas have been heralded as the perfect way of giving yourself a boost during a match and the “food of champions”. For example, according to AOL, professionals ate a whopping  5,000 kilograms of the fruit at Wimbledon 2015.

And there’s certainly no harm in following suit as an amateur and taking the chance to guzzle a banana in the middle of the match, but experts and players are now suggesting more effective alternatives: Djokovic swears by dates, while other pros eat plums, a spoonful of almond butter or the ubiquitous energy bars/gels. 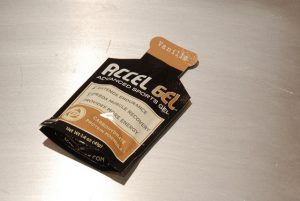 In short, these packets of semifluid sugar are a concentrated source of carbohydrates – a sort of ‘super banana’. “Gels provide some electrolytes and more easily digestible carbohydrates in the form of maltodextrin, which is a quick source of fuel, but also has some starch, so it’s not just straight sugar dumping into your bloodstream,” nutritionist and dietician Page Love told Sports Illustrated.

Although such bars, gels, beans and so on are perfectly healthy in small doses, we’d always recommend keeping it natural, where possible, and definitely steering clear of caffeinated gels (the caffeine may act as a diuretic and cause you to become dehydrated).