Much has been said about the decline of the good ol’ serve and volley, with many coaches and players alike saying it has been sidelined in the modern game as players become faster and more adept at returning topspin-heavy returns and passing shots.

However, if carried out efficiently and at the right time, the serve and volley is still an effective tool to catch your opponent off-guard. Here at Tennis Talent, we’ve compiled a tutorial and list of tips to help you develop the net skills of specialists such as Martina Navratilova and Goran Ivanišević.

Let’s begin with the basics: after serving, the player approaches the net and tries to win the point by volleying the other player’s return. The overall goal is to place pressure on the opponent and end the rally as quickly as possible.

Supposedly invented by the Australian Sir Norman Brookes in the 1920s, the serve and volley had its golden era in the middle of the twentieth century and was even the sole tactic of several players. Jack Kramer, for instance, played the “Big Game” in which he would come to the net after every service – including his second.

Since then, the tactic has fallen out of favour, although notable modern players such as Roger Federer, Roberta Vinci and Dustin Brown still use the technique as an occasional surprise attack.

The most important element of the serve and volley is to serve as wide as possible, which means aiming for the furthest corner of the service box (marked with red dots below). 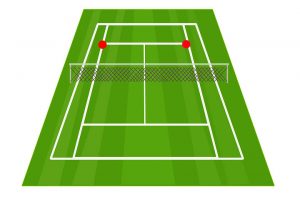 Obviously, this is quite a risky strategy as the serve can easily stray into the wrong side of the line, but it’s worth it to pull your opponent out of position and open up the court.

Once you’ve pulled off the perfect wide serve, head as quickly as possible towards the net, via the T section in the centre of the court. 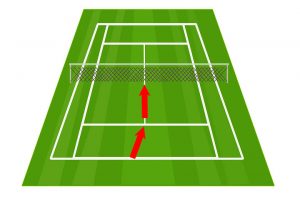 This will put you in a decent position, regardless of whether your opponent returns the across the court or down the line.

It sounds like a given, but watching both the player and the ball is absolutely crucial at this stage – every millisecond counts. Take note of their body shape: are they gearing up for a powerful, flat shot down the line? Have they seen through your tactic and prepared to lob by opening up their racket?

Winning the point is a simple as hitting a well-struck, cross-court volley into the wide-open space your opponent has left behind. Unless they happen to be Rafael Nadal in his prime, they won’t be able to return the ball.

The diagram below shows the direction of your opponent’s down-the-line return of serve (blue arrow) and the angle at which you should be hitting the volley (red arrow). 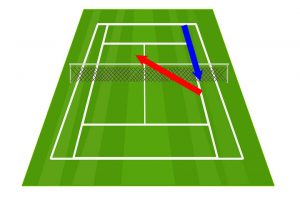 If, on the other hand, they decide to hit the ball across the court (blue arrow), the best tactic is to aim the volley back in the same direction (red arrow), preferably behind them. 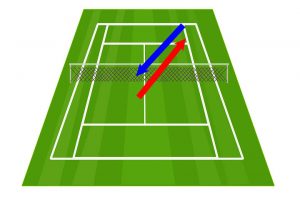 Chances are that, after returning, they’ll be scrambling to get back into a central position, meaning that they’ll be completely off-balance and either miss the ball or hit a poor return. You can then kill the point by once again volleying across the court or down the line.

Be aware that, throughout the whole process, your opponent may try to lob you. In which case, peruse our smash tutorial to gain the upper hand.

Be stingy with the serve and volley

It’s important to lull your opponent into a false sense of security before hitting them with a surprise serve and volley.

It goes without saying that this can’t be achieved if you liberally sprinkle your service game with the tactic or develop a pattern they can easily identify. Try to always keep the opposition guessing and throw one in, for example, after a particularly tiring rally.

Adapt to the surface

The best surface on which to attempt a serve and volley is a hard court. The natural speed of the ball as it bounces off the ground gives you, the server, the advantage.

However, clay is particularly problematic. As Tim Henman explains: “If I was serve-and-volleying on clay, which is obviously tough to do, I think it’s important to volley behind your opponent and not always hit the ball to the open court. Changing direction on clay is difficult, and the earlier in the match you can volley behind your opponent and force them to change direction, the better.”

Or, if in doubt, copy Roger Federer

As the supercut below proves, Federer is a modern master of the serve and volley. At 44 seconds, there is a particularly good example of him “wrongfooting” Novak Djokovic, as mentioned in step four of the tutorial above.

Now watch the three best videos showing how to serve