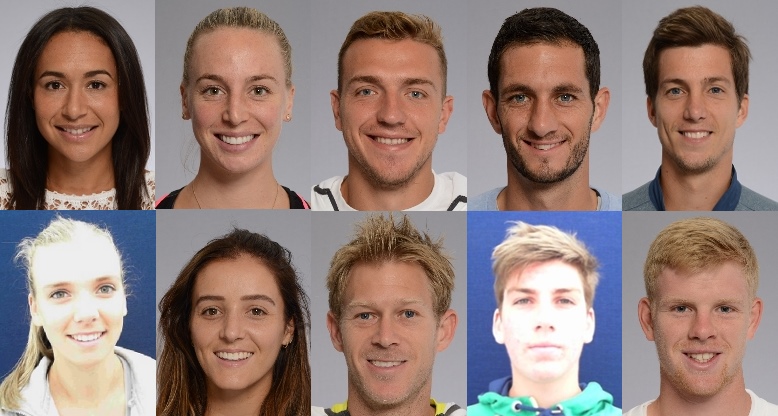 We’re going to assume you might just be aware of Andy Murray, Johanna Konta and Heather Watson. Here’s a guide to the other ten Brits competing at Wimbledon this year, along with our assessment of their chances. You may not like what you read.

So, introduced in order of their rankings, welcome to the “other Brits” at Wimbledon.

How did he qualify? Top 100 ranking so automatic entry

Kyle may not garner the publicity of bad boy Dan Evans, but he’s a hard-working pro who appears to have learned a lot from training with Andy Murray. Until last year he hadn’t gone beyond round two of any Grand Slam, but then came the US Open 2016 – where he defeated Gasquet and Isner before falling to some character called Djokovic.

Although Kyle says Wimbledon is his favourite tournament, he’s never got beyond the first round. This year he faces a qualifier and would expect to play Gael Monfils in round two – and if he wins that then Feliciano Lopez, winner of Queen’s, is likely to be too tough an opponent on grass.

Our prediction: Round Two.

How did he qualify? Top 100 ranking so automatic entry

Aljaž claimed UK citizenship through residency, having lived in London for a number of years, but we suspect that in his heart he’s still Slovenian – having represented Slovenia once in the Davis Cup, he’s been blocked from representing the UK in the same competition, and has talked of reverting back to his native nationality.

That’s a shame as there’s much to like about the way Bedene plays tennis, with confident groundstrokes that serve him particularly well on clay. Indeed, Roland Garros is where he’s enjoyed some Grand Slam success, reaching the second round this year and the third round in 2016. His Wimbledon stats aren’t as pretty, though, falling at the first round every year other than 2015, when he got to round two.

This year doesn’t look any more promising, with big-serving Ivo Karlović a past-master on grass – even at 38, he’s the number 21 seed.

We’d love to believe that Naomi has a chance at Wimbledon, and it’s true that grass plays to her strengths: a fabulous serve coupled with a great forehand. Her big problem is that she isn’t the nimblest around court, nor the most versatile of players. We’d like Naomi to mix up her play with softer, angled shots to keep her opponents guessing.

The draw has been relatively kind to Naomi, though, with World No.68 Irina-Camelia Begu her first-round opponent. Begu has only got beyond the Wimbledon first round twice in six attempts, giving Broady a decent chance to get through to round two (her best performance, back in 2014).

Our prediction: Round Two.

Arguably our most naturally talented player, Laura made her Wimbledon debut back in 2009 at the tender age of 15. That was probably greeted with cheers by the Wimbledon Girls’ contingent, as Robson had won that tournament a year earlier. She’s also famous for claiming a mixed doubles silver medal at the London Olympics in 2012, partnering Andy Murray.

So why isn’t she up there with the big names? The main culprit is a wrist injury that put her out of action for almost 18 months, from the beginning of 2014 to mid-2015. Since then she’s struggled for wins and confidence, although she did battle through the US Open 2016 qualifiers – only to lose to fellow Brit Naomi Broady in the first round.

We’d love Laura to do well in Wimbledon, but that’s heart over head: she only has one grass court victory to her name so far this season. Plus, if she does manage to beat World No.96 Beatriz Haddad Maia in the first round (and she has a chance; Maia is only 21, and this is her first time at Wimbledon) then there’s a Simone Halep-shaped obstacle in round two.

We are struggling a little to understand why Brydan Klein has been given a wildcard into Wimbledon. Yes, he holds a British passport – but also an Australian one, having been born (and still living in) Perth. Indeed, he only switched his tennis allegiance to Britain in 2013 after the Australians cut his funding in response to Klein uttering a racial slur against his opponent during a match.

Klein again hit the headlines in Nottingham for unsportsmanlike behaviour, including ball abuse and wondering aloud why a line judge was “60 years old and wearing glasses”. Safe to say that Klein needs to find some form – he’s never got beyond the first round at a slam – and some better manners if he’s going to win any friends at Wimbledon this year.

The good news? He faces Japanese player Yūichi Sugita in the first round, who may be World No.66 but has also never reached the second round of a slam.

Our prediction: Round One (and lots of post-match headlines asking the LTA why, exactly, it awarded Klein a wildcard).

We’ll be honest – until it came to writing this Wimbledon preview, we knew very little of Katie Boulter. Although quite a successful junior player, reaching a double Grand Slam final at the Australian Open in 2014, she hasn’t made a big impact since turning pro. Her biggest success is in an ITF Pro tournament (a level below the main WTA tour), winning a $15K tournament on hard courts.

She was also runner-up in a grass tournament earlier this year, but other than that there’s little to suggest Katie will trouble the excellent Christina McHale – World No.59 – in her opening match.

Studious Cameron is unlikely to make a big impact this tournament, but he’s definitely one to watch for the future. Currently studying sociology in the US – he’s three years into a four-year masters degree – he’s still managed to reach a top 250 world ranking through strong results in Challenger events, and through winning two Futures titles in the US.

He also won his first ATP main draw match in Eastbourne earlier this week. We look forward to seeing him play against Tsonga in round one of Wimbledon, but as for his chances… well, the form book and the head both say no. Only the heart suggests he has a chance.

Our prediction: Round One (sorry Cameron).

How did he qualify? Through the qualifiers

Wow. Now this was unexpected. The Wimbledon qualifiers are tough, so for Alex to beat three players – having been on a seven-match losing streak beforehand – is quite an achievement.

Whilst we’d love to believe the dream can carry on, we can’t help notice that,  despite being 27 years old,  Alex has yet to win a main draw ATP match. Indeed, he’s only qualified for two ATP tournaments, spending most of his time on the Futures tour (two levels below the main ATP tour).

The good news, for Britain as a whole, is that he’s playing Kyle Edmund in his opening match. So at least we’re guaranteed one Brit in the second round.

It’s odd to think that in another era James Ward might have had as big a profile as Jeremy Bates, reaching a career high of 89 (admittedly, Jeremy peaked at a heady high of 54). Andy Murray put paid to any chance James had of being British No.1, though, and while Andy may be peaking at age 30, James’ ranking has nose-dived in the past year.

Still, the LTA has rewarded his many years of excellent service – particularly in the Davis Cup – with a wildcard, and his reward is a match against one of the game’s great entertainers: Cypriot Marcos Baghdatis. While Marcos may not be at the peak of his powers anymore, it’s difficult to see James troubling him on grass. That said, it would be lovely to see James go on a run at Wimbledon in what may be his final appearance at a Grand Slam.