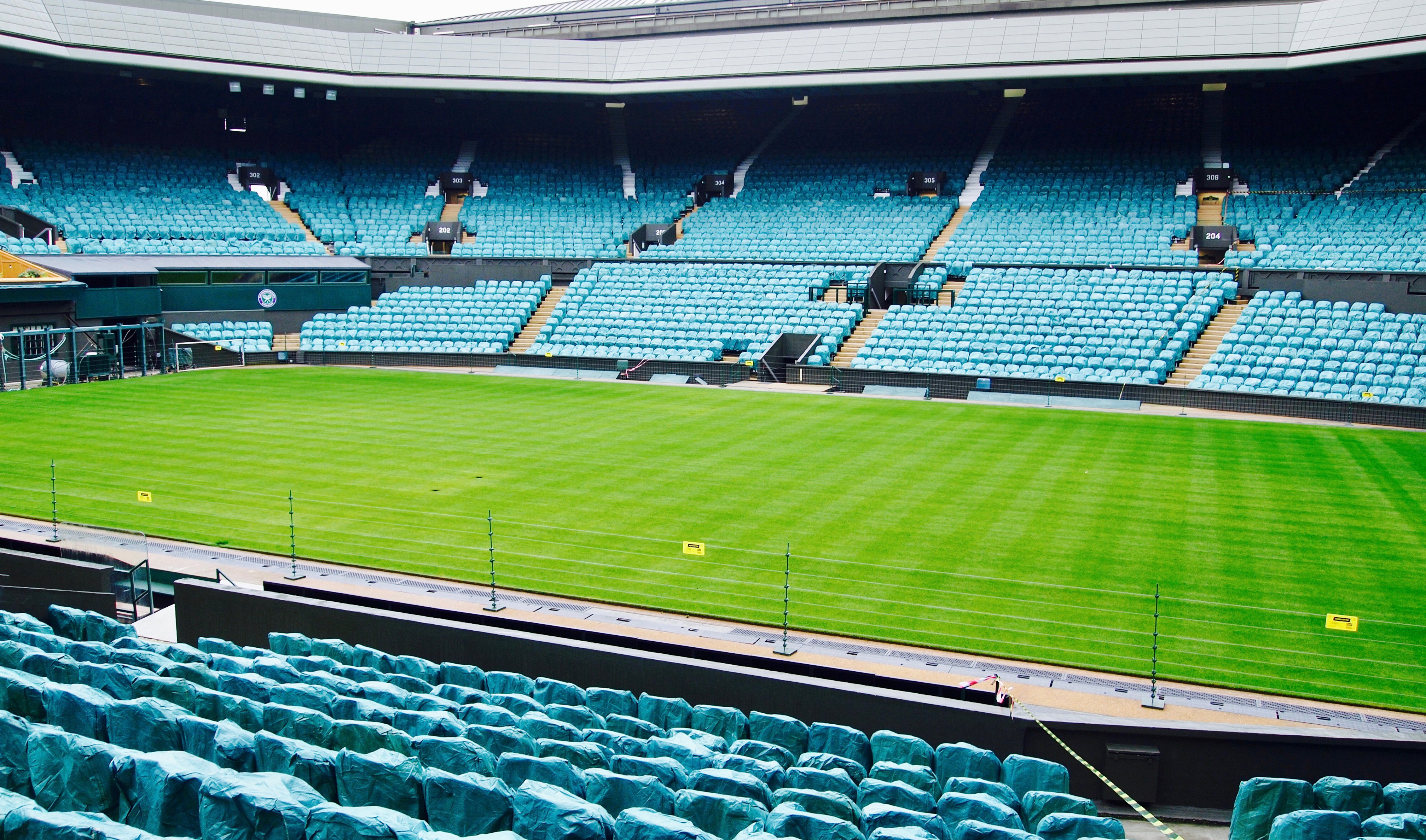 A chill, drizzle-soaked wind blasts along Church Road towards the familiar bulk of Centre Court. Wimbledon in winter is certainly a far cry from the leafy backdrop of the summer tournament, with its legions of strawberry-eating fans squeezed onto Henman Hill.

However, work never stops at the All England Lawn Tennis and Croquet Club. Throughout the short winter days, an army of behind-the-scenes devotees have their minds firmly fixed on making next year’s tournament the best it can be.

Tennis Talent headed to SW19 to interview two of the key people responsible for keeping the world’s most famous tennis tournament ticking during the bleak midwinter.

For the first part of this two-part feature, we spoke to Sarah Goldson, who directs the training of the ball boys and girls (BBGs), about the ultra-competitive recruitment process that will begin in earnest in February.

Goldson has been drilling a mixture of novice and experienced BBGs since 2012, continuing a tradition of excellence that extends all the way back to the 1920s. In those days, the boys were provided by Shaftesbury Homes, an institution for disadvantaged children, before ball girls became part of the Wimbledon team in 1977. However, one thing certainly hasn’t changed over the years: “the training programme’s really tough”, Goldson admitted.

So where do the BBGs come from now? Much is made, and rightly so, of the fact that the kids are still local to south-west London – from places such as Wandsworth, Merton, Richmond, Kingston and, of course, Wimbledon.

Teachers initially put forward a quota of Year 9 and 10s (13 to 15-year-olds) who they think are up to the task. This longlist is then whittled down in January to leave an elite group who enter the full training programme at the All-England Club.

“At the moment [in December], schools have picked the students who are going to be part of their quota,” explained Goldson. “I’m getting stuff ready for selection to make sure the procedure, the skills and stuff we do, doesn’t change.”

As you’d expect from a showpiece sporting event such as Wimbledon, the number of school candidates is huge – around 800 for 250 places. But, as Goldson pointed out, 2016 was different: “This year we counted the recalls – someone who’s done at least one Championship – so we’ve had a very large number, over 900 and close to 1,000.” That’s a lot of hopeful teenagers.

Consequently, to maximise the chances of their students getting selected, schools put together a lengthy pre-training scheme. “To be honest, some of them start training the year before – some schools start training in mid-June,” said Goldson. Most, though, begin fine-tuning their skills in October. “The school reps come here and we start doing some practical sessions with the teachers themselves. They then go back to school and do the training to prepare the kids for the selection.”

Just because a boy or girl has previously worked at a Championships, doesn’t mean they’re a shoe-in for a place on the programme. “It’s even harder with the people who’ve done it before because there will be people who’ve been on Centre Court who don’t make it a second year,” said Goldson. Aside from a pair of “outstanding” twins who worked five men’s finals, no-one is guaranteed a position, which means many promising candidates will fall by the wayside throughout the process.

“It’s very tough to get picked, let alone keep your place when you’re in. Once you’re in the training programme, there’s no guarantee you’ll be there at the end,” said Goldson. “It’s tough, particularly with the new ones because some of the teachers say ‘those are our stronger ones and how come they didn’t get through?’”

So what makes the perfect, strong BBG? Goldson outlines the most important criteria: “We assess across four different things: fitness, knowledge of the game (because you have to do some online modules), skills (feeding and rolling) and their ability to know where the ball’s going (which end of the court).”

One drill, for example, involves running a full circuit and then standing absolutely still – something that can be easier said than done for a 15-year-old. “Standing still is something they find very difficult when they start. They assume they’re standing still, but they’re not,” explained Goldson. In the pressure-cooker environment of a high-end tennis game, the slightest twitch or fidget can distract a player or even incur their wrath.

Another technique to master is the feed (see image below), an action that most of the greenhorn BBGs struggle with at first. “Most of them have some sort of sports background, not necessarily tennis, and I don’t think that, other than maybe bowling in cricket, there are many other actions in sport where you will throw a ball with a straight arm. They find that very odd.”

It all may seem relatively straightforward at first glance, but if you add other factors such as crowd noise and nerves, there’s a lot of scope for things to go wrong. Nevertheless, Goldson has every faith in the transformative powers of the training: “The length of time they’re in the programme builds their resilience. I mean, you’re never absolutely certain how they’ll react when there’s that number of people, but they have the mental toughness.”

And, if the thought of making a mistake in front of thousands of people in Centre Court, and millions more watching at home, brings you out in a cold sweat, you may be comforted by the understanding approach of the trainers: “I think if they do make an error, most people don’t notice it – apart from us. We just say that, if something happens that shouldn’t have, correct it quickly and smartly.”

The BBG training also teaches other, more general skills such as time-keeping, etiquette and the importance of maintaining a smart appearance. But, the teenagers must always keep in the back of their mind that if they fail to keep up, they’re out.

“We don’t look to lose anyone. We only lose them if they don’t reach the required standard. So if they miss deadlines for things that’ll be it,” explained Goldson. “The behaviour and discipline is absolutely key. They learn that pretty quickly.” After all, the BBGs are part of a stiff-upper-lipped history that goes back almost a century to when ball boys wore short trousers and shirts.

Goldson also emphasises that, although the process is similar to school in the respect of rules and manners, the training mindset is very different: “Because it’s got a sort of military background, the instructions are absolutely key. We don’t want to be repeating ourselves too many times… some of them pick it up really quickly, while others are asking the same questions when you’ve already answered them.”

The military analogy is a pertinent one: just as the army trains its soldiers to keep a cool head in sticky situations, the BBGs must be able to instantly recall their clear training instructions to make split-second decisions.

Nevertheless, Goldson isn’t looking for machines or even stony-faced Buckingham Palace guardsmen. The kids aren’t machines. “We don’t want them to be robotic, as it were, but we want them to follow instructions. They have got a bit of personality, they’re not just standing staring into space, and we expect them to use their initiative if they need to.”

Pieces of initiative and skill don’t get much better than this baseball-style catch from 2013.

Perhaps the best part of the video, aside from the impressive take, is the slight smile the ball boy allows himself after receiving a round of applause from the crowd. In a way, it represents the spirit of the tournament as a whole: proud, professional, but also fun.

Indeed, pride is a big part of the BBGs role. Goldson also urges her trainees to be, subtly, proprietorial about their small patch of hallowed Wimbledon turf. “We say that you have to command the court, it’s your area of the court and you’re in charge of that bit, but we don’t really want to notice you quietly going about your business.”

The role of a BBG is, therefore, triple-edged: on one hand, the youngsters in dark blue are as much a symbol of Wimbledon as the players in white, but, on the other, they’re supposed to be almost invisible. On the third hand, though, they should have an aura about them. “I think if you notice them, that’s not a good thing. For us, they need to have the confidence and the stature, which we work a lot on,” explained Goldson. “Teenagers don’t normally stand beautifully and don’t walk with great posture.”

But what it’s like to be on the receiving end of the tuition and to fulfill your dreams of making it to the top? Here are the recollections of Darius Sameri, a ball boy who worked a men’s final:

So, while you’re munching on your turkey and sprouts this Christmas, spare a thought for the hundreds of BBGs hoping to follow in Darius’ footsteps and be picked for the full training programme in February next year.