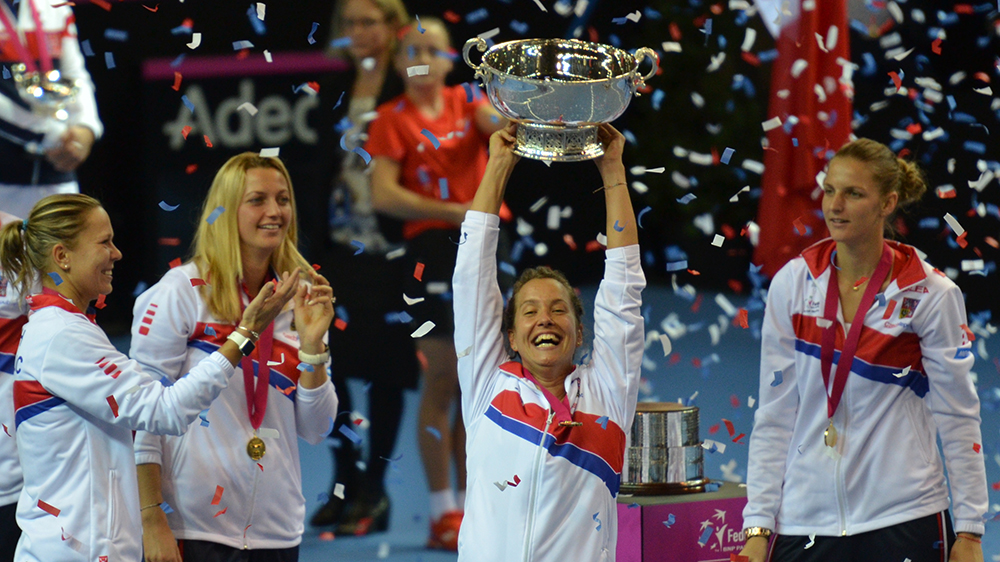 As the Great Britain team advance into the World Group II play-offs of the 2018 Fed Cup after wins over Portugal and Hungary in Estonia, we explore how the tournament actually works – and what Johanna Konta, Heather Watson, Katie Boulter and Anna Smith need to do to eventually lift the silverware.

Launched in 1963, the Fed Cup is the most important international team competition in women’s tennis. However, the format isn’t what you’d call “straightforward”, “simple” or even “comprehensible”, with former GB captain Judy Murray describing it as “in desperate need of a revamp” in 2016.

Played over three weekends during the year, the Fed Cup is divided into the World Group, World Group II and three regional Zones. If you follow English football, think of it as the Premier League, Championship and three lower leagues that are roughly on a par.

World Group contains eight nations, which in 2018 are Belarus, Belgium, Czech Republic, France, Germany, the Netherlands, Switzerland and the United States (who are the defending champions). These are the current heavyweights of the sport.

World Group II also contains eight teams that are effectively “the best of the rest”. This year, they are: Australia, Canada, Italy, Romania, Russia, Slovakia, Spain and Ukraine.

So far, so simple. However, things start to get complicated with the three regional Zones that contain the rest of the teams. These Zones are separated into the Americas, Asia/Oceania and Europe/Africa, which is currently home to the Great Britain team. However, each is also separated into two tiers, or groups (apart from Europe/Africa Zone, which has three) – a sort of mini-tournament within the tournament.

Still with us? Well, things are about to become even more complicated. Although the Fed Cup is a huge tournament, only the members of the elite World Group are actually competing for silverware. World Group II, the Zones and the sub-groups just have their eyes set on promotion. Unfortunately, that means the GB team have a long road in front of them before they have a shot at the title.

The World Group’s format is relatively simple: there are four first-round matches. The winners of those matches go onto the semifinals, while the losers have to fight for their place amongst the crème de la crème. The winners of the two World Group semifinals then compete in a grand final to be named the best team in the world. Simple.

So what happens to the losers of the first World Group II matches? They fall down into the – surprise, surprise – World Group II play-offs, where they play the four best teams from the top groups of the three regional Zones. The winners of the play-offs secure a place in next year’s World Group II.

“Hang on a minute, how can you get four teams from three Zones?” I hear you ask, one eyebrow raised. Simple: as the Europe/Africa Zone has more teams and groups in it than the other Zones, two nations advance to the World Group II play-offs instead of one.

Each of the Zone’s top group winners gets into the play-offs by competing in round-robin tournaments involving pools. These contests vary from Zone to Zone, but they’re relatively similar to the World Cup in football. Each team plays all of the others in its pool, with the winners of the pools playing each other in semifinals. There’s then a “promotion” final with a place in World Group II up for grabs. The worst top group teams also get relegated to the second tier of the Zone, while the best second group team gets promoted to the first tier.

Phew, that made my brain hurt. Typing out those, very convoluted, paragraphs and then re-reading them has hammered something home: I completely agree with Judy Murray. The Fed Cup needs a major rethink as soon as possible.

Luckily, the all-important match format is relatively straightforward. World Group and World Group II ties are best-of-five-matches contests spread over two days. Two singles matches are played on the first day, while the reverse singles matches and then a doubles match are played on the second day. Zone group matches, on the other hand, are a best-of-three (two singles and a doubles) competition played over one day.

So what are the GB team’s chances?

This year, Great Britain started off in the top group of the Europe/Africa Zone. This was good news as it gave them a shot at the World Group II play-offs and, hopefully, a place in the second-tier of next year’s competition.

It was a chance that they didn’t miss: after wins against Portugal and Hungary in Tallinn, Estonia (which is a stunning city, if you’ve never been), Great Britain have now advanced to an all-important World Group II play-off against Japan on 21 and 22 April.

If Anne Keothavong’s team win, they will start in World Group II in 2019 – which will be Great Britain’s highest level since 1993. Standing in their way are Naomi Osaka (World No.53), Nao Hibino, Kurumi Nara and Miyu Kato. Bring it on!