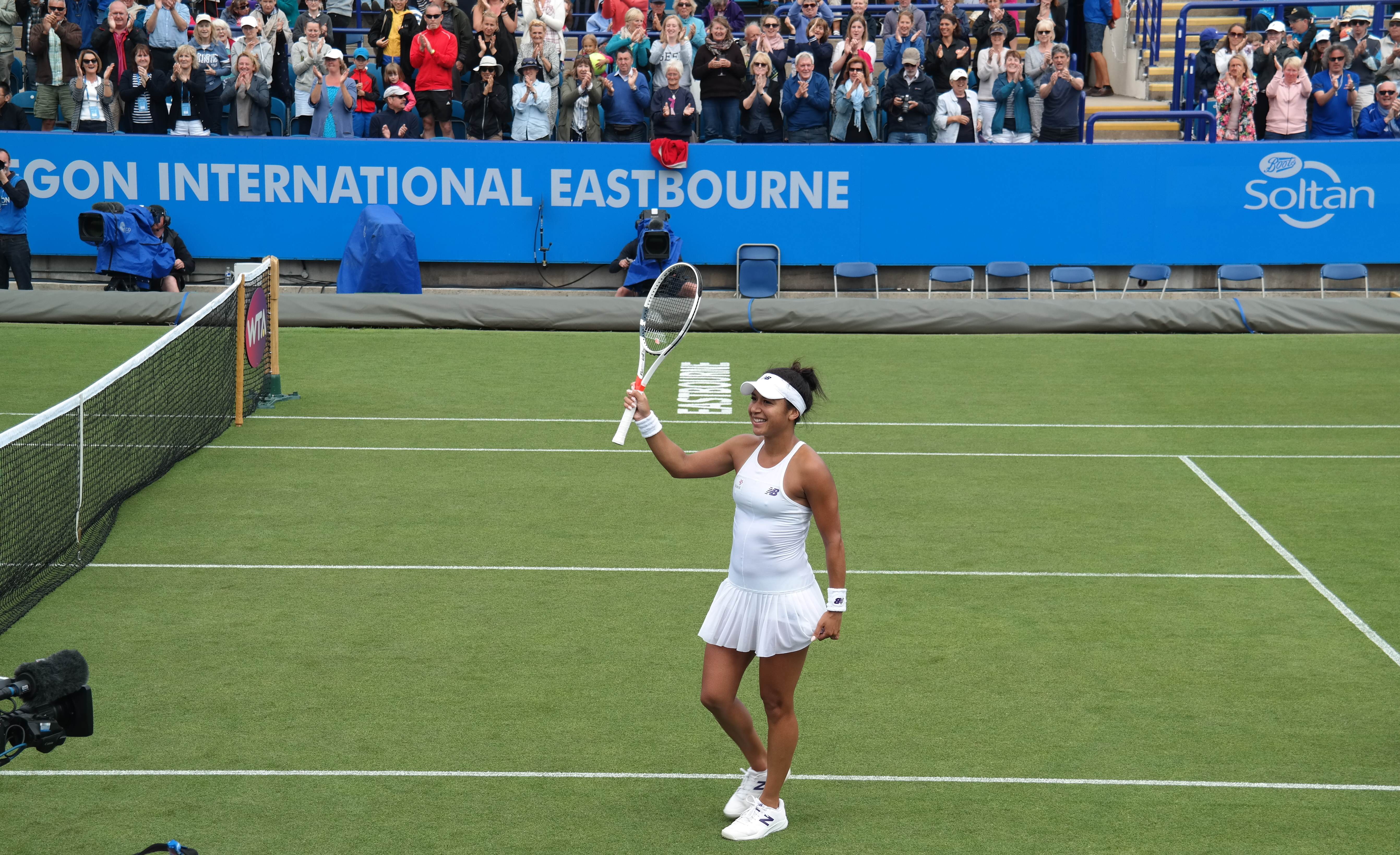 Oh Heather, you do like to put your fans through the mill. A match that lasted one minute shy of three hours, a match that was full of moments of sublime beauty one minute and crazy mistakes the next – but also a match that gripped the Eastbourne centre court for every single moment.

It didn’t have to be this way. Heather could have won in the conventional two sets if she had taken one of the numerous break points she earned at 4-4 in the second set. Instead, she and her admirable opponent – world number 34 Lesia Tsurenko – took turns at gaining game point, only to squander it through error or see it ripped away through a brilliant winner.

It took them 20 minutes to settle that game, and when Tsurenko won it – and went on to take the set 6-4 – it felt the momentum was swinging only one way. But this is Heather Watson. To call her a plucky Brit is to misunderstand the talent she holds in her hands. Need a thumping first serve at 110mph? Heather can deliver. Likewise a two-handed backhand that powers winners down the line, a thumping forehand, the most delicate of touches at the net.

She is the closest thing we Brits have to poetry on grass.

But not always in a good way. With Konta and Murray, we have confidence they will prevail, but Watson resists the straightforward ending.

The final set sums this up perfectly. She took the first game with a break, and seemed on course to make it two in a row, only for Tsurenko to increase her power as Heather seemed to retreat. At 40-15 we thought we were heading to 2-0 to the Brit; instead, our heroine was down 2-1.

With both players looking tired, it surely seemed that Tsurenko would power on to win the set. Indeed, watching the match from the stands I wouldn’t have been surprised if Heather had buckled under the pressure and failed to win another game.

Instead, she broke. 2-2. With both players struggling to hold serve, we stuttered our way to 4-4, with Heather using her obvious intelligence to mix up her tactics when her legs grew tired.

And then we came to the pivotal game. Tsurenko serving and Heather playing some brilliant shots to earn five break points, only for her opponent to hit groundstroke after crucial groundstroke with unerring accuracy. It was a mirror to the ninth game of the previous set, and as each opportunity passed it seemed more and more likely to finish the same way.

It was a mirror to the ninth game of the previous set, and as each opportunity passed it seemed more and more likely to finish the same way.

In the post-match interview Watson would say, “I expected her to make me play one more shot – that’s her strength. But maybe not that much.”

In the end, it was a mixture of rare mistakes by Tsurenko and brilliant winners from Watson that won her the game. 5-4. She would be serving for the match.

At this point, anything could have happened. Both players brought in their coaches for that final bit of advice. It started as the partisan crowd hoped: 15-0. Then an aggressive groundstroke from Watson that was out by a whisker. 15-all.

The next point saw Heather come to the net, ripping a volley winner down the line. 30-15. The crowd roared their appreciation, as they had the whole match. What could happen next? The answer was a convincing ace, Heather’s first of the match.

With two match points, the crowd held its breath as we watched a short baseline rally. Tsurenko hit the ball short and there was Watson to finish the match with a cross-court winner.

To somehow bottle the roar of the crowd as it stood up, bellowing its approval en masse, would be a precious commodity indeed – something for Watson to take with her on her travels around the world as she aims to regain the form that took her to world number 38. She currently sits in 126th position.

.Certainly let’s hope she carries this form on for the rest of this excellent tournament, and then on to Wimbledon.

But, lest we be carried away by Watson’s performance, it would be unfair not to acknowledge the part played by Tsurenko. She played a crafty, skilful and contained game that put pressure on Watson throughout all three sets: not just putting the ball back into court, but playing the ball at speed and with a consistent, deep length. Watson had to earn almost every point she won, with few freebies to enjoy.

That’s why the crowd took to its feet to applaud the Ukranian as she left the arena, leaving Heather alone for the post-match interview.

She was hit with the obvious question: after that dramatic match, how do you feel. “I’m knackered,” said Heather.

Well, yes. And after watching that for three hours, we know exactly how you feel. Roll on Cibulkova tomorrow.