If you’re new to the world of doubles, it can be difficult learning to coordinate with your partner. It is, consequently, important to approach every point with a clear tactic and position in mind.

In this tutorial, we’ll run through the three basic positions you should adopt after the serve: “two up”, “two back” and “one up, one back”. 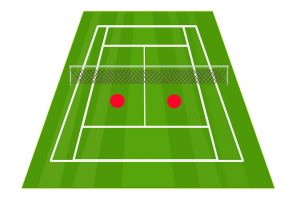 This is the most attacking formation as, together, both players (the red dots) are covering the court at the net and are in a position to quickly volley or smash to win the point.

However, as the empty green space on the diagram above shows, moving into this position makes you very vulnerable to a lob. It’s key, therefore, to watch your opponents’ body language and recognise when they’re opening up their racket for the shot.

If they do send the ball sailing over your head, your teammate can run behind and adopt the emergency “one up, two back” position (see below). 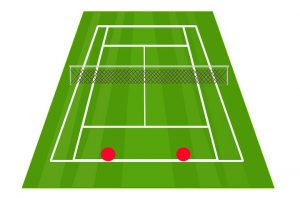 This position involves both players standing on the baseline. It means most of the court is covered and you can no longer be undone by a lob.

This, unlike “two up” is a more defensive tactic, making it more difficult for the opposing duo to hit winners at the net. By the same token, it will also be an uphill struggle for you to win the point from the baseline.

One up, one back 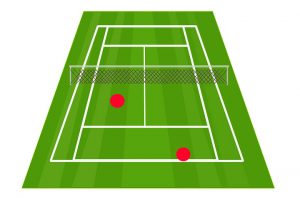 In “one up, one back”, one player is at the net and the other is on the baseline, ostensibly covering the back of the court.

This is traditionally the worst position to be in as it leaves a gaping hole in the middle of the court that the opposition can exploit with a volley or cross-court shot.

However, you will be inevitably be drawn into this setup when responding to a lob or missed shot at the net. The key is to get back into “two up” as quickly as possible.

Now read about how to master the serve toss.